The AEGIS Combat System is an integrated naval weapons system developed by the Missile and Surface Radar Division of RCA, and is now supported and produced by Lockheed Martin. The weapons system utilizes powerful computer and radar technology to track and guide weapons to destroy incoming enemy targets. The word "Aegis" is a Greek mythology reference to a protective shield as the Aegis was the shield of the Goddess Athena.

The AEGIS system was initially implemented by the U.S. Navy but is now used around the world, including: Japanese Navy, Spanish Navy, Norwegian Navy, Korean Navy, and Australian Navy. It makes up the backbone of the United States missile defense system and is currently being adopted by NATO across Eastern Europe as a deterrent against the possibility of future threats.

Power Systems & Controls was selected by the contractors responsible for the project to provide Static Frequency Converters, which would supply 400Hz to sensitive electrical equipment. We can't go into too much detail due to the sensitive nature of the application, but we look forward to the small part PS&C has to play in helping to protect the United States of America. 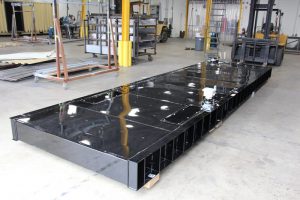